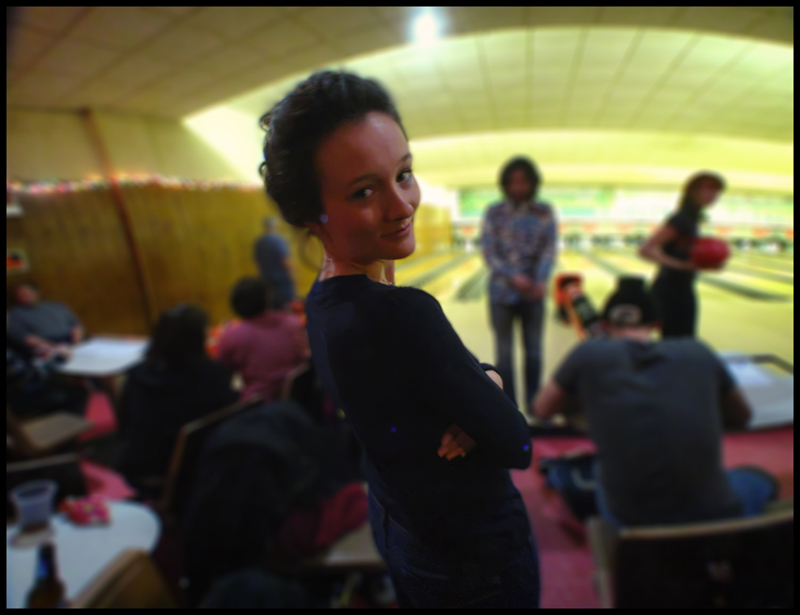 It’s been atleast 10 years since I’ve gone bowling. There’s always been something very unappealing to me about it. I’m not very good at it, the place smells like feet and often it’s populated with some of the most depressing people I’ve seen since having to get my drivers license renewed at the DMV or Secretary of State office.

Anyway, it was Andy Taylor’s birthday and he wanted his friends to go bowling with him. I decided early on that I was too old to worry about how well I did or what I looked like while doing it. If only I had learned that skill when I was much younger, I might have had a much more pleasurable life. In any case, Petra wasn’t too excited about the whole experience before hand either. However, she put on her (ridiculous) rented bowling shoes and went along with it. After throwing her first ball and 1 beer later, she and I were  having a great time.

After bowling, we caught a train and then a cab to go clear across town to Wicker Park and meet up with some friends at Nick’s Beer Garden, where our friend Pete Special was playing.

Despite the horrible weather, the stinky shoes, the overpriced cabs and scary vacant subway cars late at night, it was an evening we both very much enjoyed.

Previous articleComcrap and their ridiculous use of the word "Service".Next article Restoration Salon Grand Opening

Just had to say, thats a great photo of Mrs. C! It looks like marriage agrees w/her.