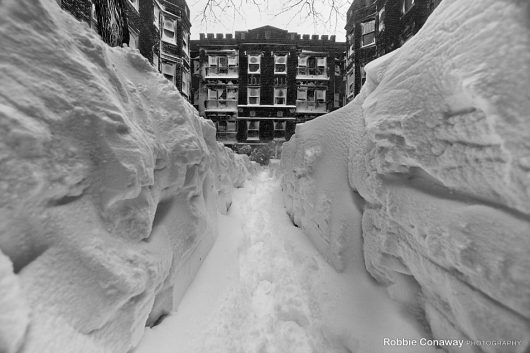 Unless you have been living in a jungle in South America, you know that the midwest and Chicago were hit with an incredible snowstorm. It was only the second time in my life where I have seen both a freezing blizzard and lightning together. The winds reached near hurricane speeds and two days later dropped to -4˚f . For the first time in a very long time. The city stopped. Reflected and wandered out into the world that now felt like another planet.

Actually, no. He and his partner were really nice. Everyone was nice that day. I think we were all just so amazed to see our city like that. He actually gave me his card because he wanted his photo. I’m planning on sending him a link to this page.

I was just in the jungle in South America.. aha ha

Great photos Robbie! You are so talented. Thanks for sharing.

What great photos. I am always blown away at your videos and photos. Keep it up; it’s a nice break from the bullshit to reflect back on how bad winter was. I don’t think it’s ever too late to snow in Michigan. Take care!