Facebook: Yet another way to talk about your kid.
December 4, 2008 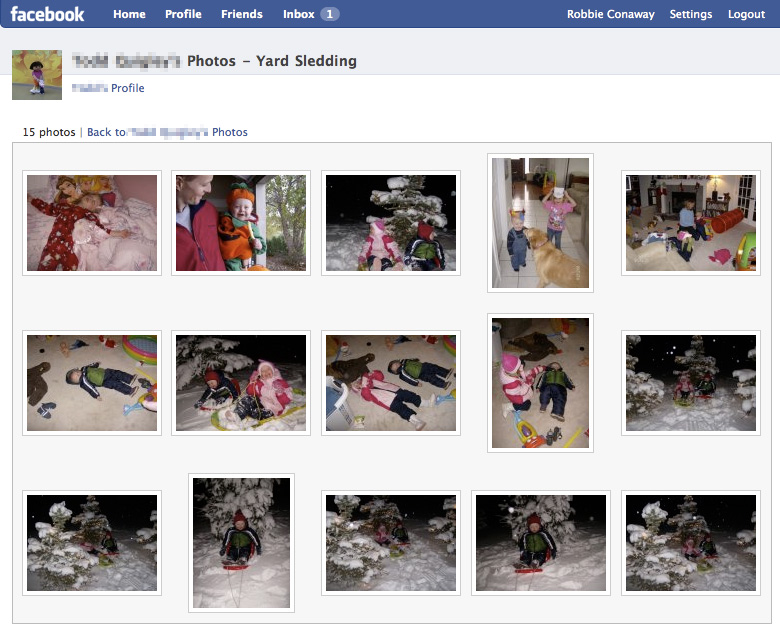 I have seriously HAD it with Facebook being used as a place where people show nothing but pictures of their children and not one photo of themselves. YOU asked me to be YOUR friend; NOT your kids friend. Where it says “profile” photo, there should be a photo or image that represents YOU not your kid. It’s not your kid’s facebook. If you want to put up a special twisted facebook page for your child (who isn’t even old enough yet to say “you’re an idiot”) then by all means.

Something I really hate; people from my past who ask me to be their friend on Facebook who have nothing but photos of their children on their page. The main reason I’m accepting you as my friend is because I want to see what you look like now after all these years (I probably don’t even want to be your friend, because chances are we have very little in common by now. Especially if you have kids.) It’s NOT because I want to see your kid on the merry-go-round; your kid stupidly sitting on your boring, fenced in, suburban back yard; your kid shitting for the first time in the big people’s potty; a second by second series of lame ass photos in the surroundings of your lame ass life with your kid doing fuck all while you think it’s the greatest thing you’ve ever taken a picture of.

News Flash: No one but your immediate family and a few close friends gives a shit about your kid.

I got on Facebook to keep in touch with my friends; not their ugly, dirty, boring, kids.

I don’t mind you having some photos of your kids in the photo section, that’s understandable. We all take pride in our accomplishments and current interests in life, but your kid is not the only thing that defines you. Your kid is NOT the sum total of everything that makes you matter.

I love kids (though have no interest currently in having one), but one thing that really puts me off about some people who have kids is the fact that it’s ALL they talk about, as if they don’t even exist anymore except to be witness to the amazing one of kind experience of raising their kid.

“It’s different when you have one of your own”.

If I hear that quote one more time, from one more meat head parent who thinks they are the first to either tell me it, or think it; I’m going to shove their stupid (insert baby or child’s plastic thing-a-mabob covered in creepy, mucous and milk spit up here) right in their stupid, shit eating, know-it-all grin.

The condescension from some of these morons for NOT having a kid and plastering it’s stupid mug all over facebook is staggering sometimes.

Finally, if your kid is the only thing in your life that you have to talk about, then save yourself some time and effort and leave me out of your friends list in Facebook, or your life completely, because you are seriously a boring individual and the only person who gives a damn about you is…surprise…YOUR KID.

I have to ponder this for a minute before I can comment HOWEVER….on a similar note..WHY the F do people from high school that NEVER talked to you then want to be your friend now??? WHAT could we ever have in common “oh hi how ya been, didn’t know you then, REALLY don’t know you now….??? That GETS me AND people that put the EVERY last thing they do day to day in the update section… “having coffee”, going to rake the leaves, making a sandwich” WHO CARES …. !! I mean SERIOUSLY!!!!

you know how I feel about people insisting that they know me better than I have known myself for the past 30 years and I will ‘change my mind’. hey buddy, no I won’t. I like kids but I value my sleep, time and money above and beyond the emotional drain of children. that and I have precious little patience as it is.

a funny anecdote to the entitlement people who breed have involves a Christmas party we had at the restaurant this evening. the host of the party pays for X amount of each appetizer passed on a platter and send them out for all to enjoy. a server comes to me and the sous chef asking for a BOWL of crab cakes for a woman becuase she was pregnant. oh! so all of your co-workers should donate to your unborn most likely mistake of a child? we don’t set down full platters of appetizers because they are for EVERYONE. nevermind the 6 other appetizers, pizza & buffet?

I’m thinking I should get pregnant so I can get on planes first with my brood, take up city sidewalks with my double wide stroller, latte and unminded dog and regale anyone who listens with how cute my child is and what precious thing they did. wait…what about the part when they become a meth addict and steal your shit and expect you to buy them louis vuitton bags because their friends have them? thanks but I will stick with the dog & cat. I feel you on this one.

What about people who do that with their PETS? Worse, or better?

Better, but only marginally. Especially if they’ve somehow dressed up their pet or emotionally tortured it in some way. For example: http://tinyurl.com/58l5oo

I already ranted about this with you yesterday so I will refrain from repeating myself. However, I will say that if I had a cat I would dress it in that outfit EVERY DAMN DAY.

Until, of course, it murdered me with it’s death ray while I slept.

Can I just be the first mom to give you a hallelujah shout?

I am guilty of the pic uploads, but try to keep them in a seperate album so if you don’t give a damn about my kid then don’t open that damn album.

And another AMEN to kiddie profile pics – I can’t stand profile pics where I can’t tell who the hell is in the picture when someone I barely remember invites me to be their friend.

ZOMG, I had to call mom into the room to share this.. We are ROLLING… She says, that’s so true! But you know he’d be the absolute WORST of anyone if he had a kid!! But i digress.. Rob wouldn’t post any photos of his kid. Not one. He wouldn’t want the competition for attention.

Why do you think I have no plans for children?