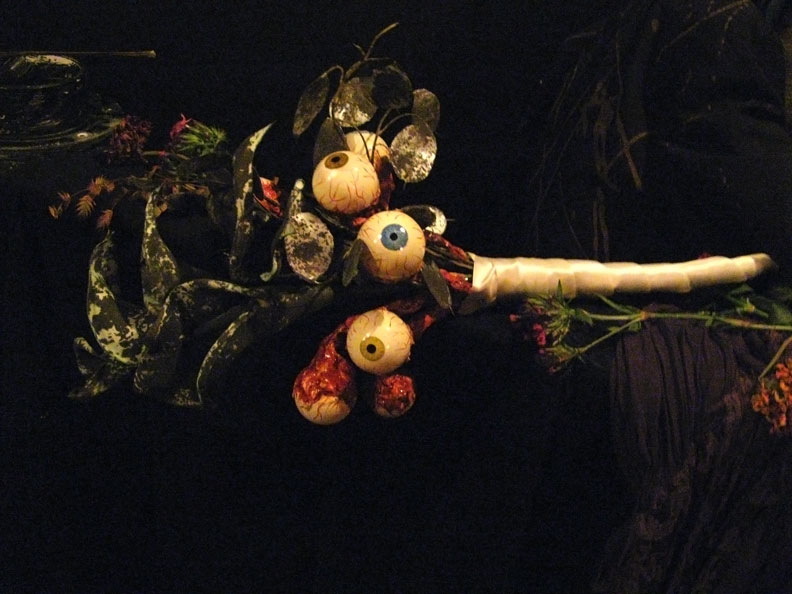 A bouquet of eyeballs

Last night Petra and I went to go see our friend Nicholas “The Nick” Kopsian in his first ever (if you don’t count boy scouts) go at acting in a play called Frankenstein in Love, put on at the Chemically Imbalanced Theater here in Chicago.

The synopsis of the play is as follows:

“A political revolution in a fictional South American country has turned the world upside down and opened the door to a secret laboratory, allowing chaos and monsters to escape. El Coco, the leader of this rebellion, is himself a created monster with a never-ending desire to be human, overcoming his murderous instincts and unnatural appetites. Nothing, he soon discovers, is more human than finding love. But standing in his way is Dr. Joseph Frankenstein, the man who gave him life and who now threatens to take it away. Ravenous creatures, sardonic ghosts, and desperate revolutionaries surround the question: Who is the Man, and who is the Monster?”

I think if you add up all the plays I’ve attended (not including the community theatre plays I used to be in as a preteen), it would come to about 7 or so. About half were big budget plays such as Hair and the other half were VERY small budget plays such as many of my actor friends are in (which is not to say that they are not deserving of larger stages and production), so I guess you could say that, in a way, I’m a bit of a novice when it comes to theater (so much so that I’m not even really sure whether it’s spelled “theater” or “theatre”).

“Is the enjoyment of theater supposed to be an appreciation of skill and effort on the part of the actors and crew, or is it the forgetting of the people involved entirely and the “losing oneself” in it, the pinnacle of good theater?”

Anyways, my point is that I’m not sure I understand theater properly. I don’t think I “get it” the way other people seem to. I have not yet been to a real ballet or an opera, but I’m very curious and someday promise myself that I will attend both at least once. I often find myself feeling very nervous for the actors, almost somewhat embarrassed for them. It’s an extremely unnerving sensation and is very distracting to me while trying to enjoy myself during the event. Even when they are doing a great job, especially if I don’t know them. When it’s my friend(s) doing the acting, I feel really pretty good watching them, in a sense, like I’m cheering them on, but in another way, I feel like it’s all a bit silly. It’s like watching grown adults pretend to have a tea party, or watching grown men pretend to be a great wizard in a game of Dungeons and Dragons.

I can’t seem to get lost in the stories like I can with a book or movie or television show. But then again, I’m not sure I’m supposed to. Is the enjoyment of  theater supposed to be an appreciation of skill and effort on the part of the actors and crew, or is it the forgetting of the people involved entirely and the “losing oneself” in it the pinnacle of good theater?

Let me preface by saying that I think my friends are excellent actors. They do a fabulous job of delivering their lines with energy and enthusiasm. I was very proud of our friend Nick’s first performance. He did a really great job and I was extremely proud to see him pursue an interest that I would NEVER have the courage to undertake because I am too scared to look foolish. I think that my friends could ALL be Hollywood actors and work right along side the big names, with no problems whatsoever.

I think it’s the environment that I can’t seem to accept. It’s too small in those theaters, too intimate. The sound systems in there are too small and ineffectual. The props are too fake and look like something a child made at camp. I’m too involved in the process. I don’t like  the idea that an actor might pick me out of the crowd to be a part of the production, or even speak their lines to me in a way that I have to react with an “I’m-really-enjoying this!” face, so that they feel good about it.

Perhaps the problem is that 1.) I’m too insecure a person to enjoy theater and that I need to loosen up and/or 2.) I’ve been so conditioned by television as a resulting medium of theater, that I’ve completely lost the aesthetic appreciation of the medium that birthed it.

In any case, I was glad we went and I’m always amazed at the actors abilities to not only memorize their lines and to deliver them with zeal, but to do much of this in their spare time while still maintaining their day jobs and busy schedules. I’m very glad to help my friends pursue their interests and to encourage them to do more in life than just the basic requirements, but also to hopefully broaden my own appreciation of the arts and the world around me. I think it’s crucial to a healthy life to not forget that these sorts of things are the REASON we go to work and do things we don’t like; so that we can go out to plays and art shows and movies and see live bands.

But theater is proving to be a tricky thing for me to get lost in.

Does anyone else have this feeling?

Can you tell me who did your layout? I’ve been looking for one kind of like yours. Thank you.

The link to the designer is at the footer, but I’ve tweaked this design a bit and added some stuff of my own to the layout.

I think, and I am not just basing this on your blog, but on conversations we’ve had, that you don’t have a very strong pair of “disbelief suspenders”. Some people don’t, they find it hard to lose themselves in some fiction or fantasy. In most theater productions the cast is asking you to come into their world and accept that world view for a while. Obviously you have a hard time doing that. You have a very critical eye that you can’t just turn off.

By the by, saying “I’m always amazed at the actors abilities to not only memorize their lines and to deliver them with zeal” is pretty snarky. This would be like if someone saw one of your paintings and said, I really like the way you know how to hold a paintbrush or one of your websites designs and admiring your ability to right click. Jerk ass. 😉

Thanks for coming though. You guys should have hung out for drinks.

Oh. very sorry. I really didn’t mean to sound snarky in the least. I am genuinely amazed at actors abilities to remember all of that. I find it seriously staggering. I have no idea how it’s even possible. I can remember song lyrics (sometimes), but they are short and it’s much easier to remember things with a melody (like your “A-B-C’s”), Perhaps zeal is not the best word to use. I mean to say that most of the actors that I’ve seen in theater deliver their lines in a way that sounds genuine and NOT read from a script. I’ve learned first hand how incredibly difficult it is to do that and I for one don’t think I possess that skill in the least. I greatly admire actors and am extremely interested in the world of acting. I just can’t seem to “relax” during theater, perhaps because I know the actors can see me and my reaction their acting, which makes me feel some pressure to approve or something like that.

I used to feel like you about plays.I thought they were corny and I always preferred movies. But for some reason, after seeing your cousin,Chris, in a play in Az. where he was THE ONLY ACTOR for the whole play, I was hooked. It was Under the Lintel, and I’m sure Nick knows it.The meaning of the play hit me in the stomach. Since then I even like high school plays. Yes,I think it’s more fun if you “get into” the story. But with movies you were always interested simultaneously in both things -the story and the technology of how it was made. Not a problem.

I found your notations introspective and interesting. Probably one reason you’re scared for the actors is that you’ve done so much performing so you get “in their shoes.” If Nick
has another play, give us a call and we’ll try to come. He’s a “friend” on my facebook.