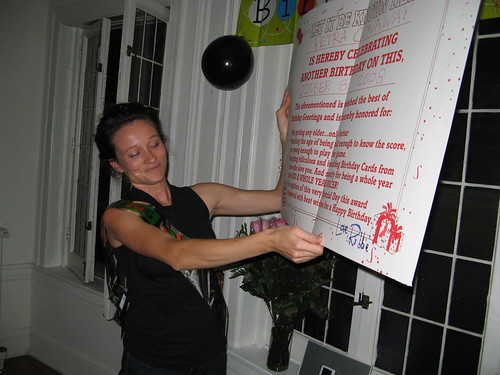 Petra turned 30 on October 8, 2008. Being a milestone birthday, I thought that the usual gift wasn’t quite enough to mark this important event. Close friends and folks we hadn’t seen in a while all showed up throughout the evening to partake in the free wine, beer, liquor and Czech food there. The hors d’oeuvres were from Trader Joes and the main meal was purchased from Operetta, one of the very few Czech restaurants in the surrounding Chicagoland. Buying vegetarian czech food can be very difficult, to say the least, but in the end I think the meal was quite tasty (how does one NOT like the taste of a block of fried and breaded cheese?). Lots of friends came out to wish her a happy birthday and bring some very nice gifts. From me, Petra received a massive birthday card and private dance lessons from Dance Center Chicago. The evening finally came to a close at 3 in the morning. The hangover, however, lasted until nearly 2 days later.

HAPPY BIRTHDAY PETRA – Did not realize the date – hope it was a great one! Can’t wait to hear about the dance lessons.
love, tina and David and Cameron