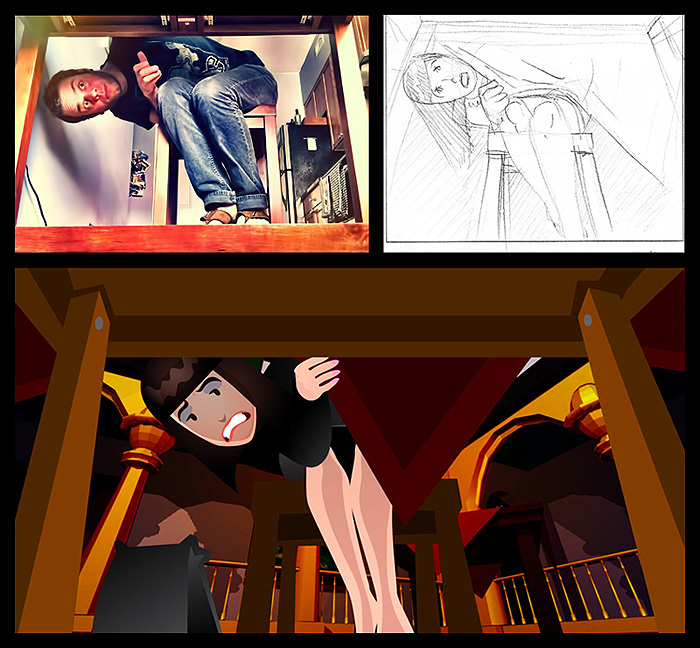 Swindled tells the short simple story of a woman who gets her wallet stolen. As she goes online, she learns that the thief has made quick work of her checking account. This animation marks the beginning of me using After Effects instead of Flash.This is the basic work flow:
1. Receive the script from the client. Make any changes needed to dialogue.
2. Choosing from sometimes over 300 actors, hire the talent to do the voiceover work.
3. Create the soundtrack to the animation, including sound effects, music, voice over, etc.
4. Storyboard the script keeping in mind any issues or difficulties that may come up in the animation process. Note visual ideas that may help the script along.
5. Create the backgrounds based on the storyboards (in this case the backgrounds were created in Maya 3D software with ramp shaders to give the illusion of 2 dimensional cartoon artwork. This allows to take multiple shots from different angles). Backgrounds are then exported into layers of foreground, middle ground, and background.
6. Characters are created in Illustrator. Multiple angles are created for each character if necessary, as well as mouth shapes for lip synching, body parts, eyebrows, eyes, etc. These are separated into layers to later be animated more easily. Other objects that the characters interact with also must be created at this point (phone, pencil, glasses, etc).
7.  The soundtrack and all of the visual assets are imported into After Effects for the animation process. Backgrounds, characters, foreground, objects are tweened and animated. Lip synching is done at this point. Camera movement is added (zooms, pans, tilts).
8. Color grading and filters are added to make the image “pop!”
9. Animation is exported into Final Cut where it is then possibly reedited if needed. Title sequence is added along with any closing text and then finally compressed into a smaller quicktime file for the interwebs!
10. A huge sigh of relief as I pour myself a drink.

Previous articlePortland and The Pacific Northwest

YOU ARE INCREDIBLE, Robbie!!!! After reading what was involved in the making of this masterpiece, I’m in AWE of what you’ve accomplished!! I LOVE IT!!!!! Absolutely LOVE IT!!!! Would you mind if I put the finished video on MY website? I’d love to show it off! :o) Yup….you are amazing! Unbelievably talented! Phenomenally creative! Brilliant! (The list could go on for another page, but I think you get the idea……)

Sure! Feel free to post it on your site. No problem. Glad you like it. Well done on the voice over. You nailed it on the first go around. Very impressive!