The Art Institute of Chicago. 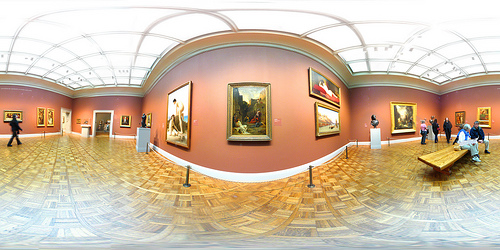 This past week, my parents came to Chicago for a very short visit before I take off for England to do our very last Ghettobillies shows. They arrived early in the evening and we went out to Andie’s Mediterranean Restaurant in Andersonville, where Andie himself poured our wine for us. Then we left for Carnivale for some live latin music, but were turned away from the door, due to a private party being hosted there that, apparently, took up the entire club for the entire evening. Slightly irritated, we drove to my original first choice for entertainment; The Green Dolphin Street. The first half of the evening was a live jazz band and the second half of the evening was spent in the large ballroom there as they taught everyone Salsa, Mambo, Ramba, and Bucheta (which turns out to be a sort of tex-mex kind style similar to line dancing and salsa).

A pretty good time was had by all, however, it was getting late and Mom and Dad were getting tired after their long trip driving here. I was still impressed with their stamina.

The next day we spent at The Art Institute of Chicago, mostly examining pieces from the impressionists and just before. One of the main impressionist sections was closed off however and we never made it to the other areas. We did however see a photography show on the lower level that had some amazing images of turning points in the worlds history.

That evening we came home to realize my father’s car was towed from our own parking space in the lot (because I forgot to put the sticker on the windshield), and we had to go down to Lincoln Towing to get it back, only to find that they towed his car the whole way there with his emergency brake on! They even towed my roomates car out of the way, in order to be able to tow my dad’s car which was safely tucked away behind the car with the sticker.

Lincoln Towing is a mafia run, teamsters, scam and should be shut down immediately!

The next day, we bid Mom and Dad adieu and waved as they drove off with their messed up car…

Hey, car brakes or not, it was a really nice time. The Institute is huge and has some REALLY famous paintings. Robbie and Petra took good care of us.(But Petra and I never fully conquered the salsa .)

Good luck to the GB in Clitheroe!