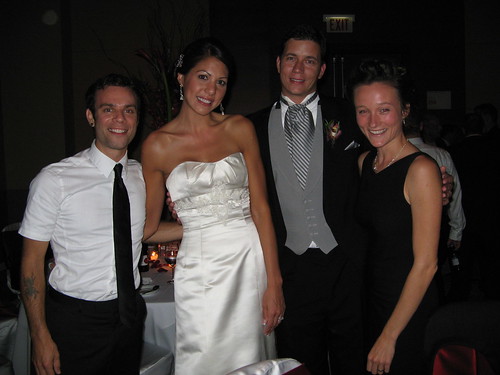 Petra and I attended the wedding of John and Alicia Carney in Schaumburg, IL. I don’t know much about Schaumburg, except that my friend Frank loves to make fun of it all the time. However, the newly built and thoroughly modern Renaissance Hotel there in Schaumburg is quite an amazing place. John Carney is half of the team/company Fly Design, which I’ve worked for and drank with on many occasions over the last few years. The other half of Fly Design is Frank and his  new fiancee’ Colleen (soon to be a Dibraccio). The wedding reception was, to say the least, the most lavish wedding reception I’ve ever attended thus far. No expense was spared for this over-the-top wedding event. Our friend Neil Dixon Smith was hired as the classical/South American guitarist for the cocktail hour, which he pulled off like something he does in his sleep. Petra and I wish the newly married couple all the best in the years to come and had a fine time. After the wedding, we quickly drove downtown to the Bottom Lounge club to meet up with our friend Pete Roe who is playing in the band Laura Marling. He also gave us a look around their enormous brand new tour bus. More pictures of the evening HERE on my Flickr account.

Robert,
Thanks so much for the well wishes and for coming out last night. Petra looked amazing and you looked halfway decent yourself. 🙂

Niel Dixon did an awesome job, We got quite a few compliments about him, he played like the studhorse he is! For those of you who want to know more: http://www.neildixonsmith.com

Are you standing in a hole?
Petra has at least four inches on you. 😉

I could give you inches…I’m too tall.