The Last Ghettobillies Poster I Will Ever Make. 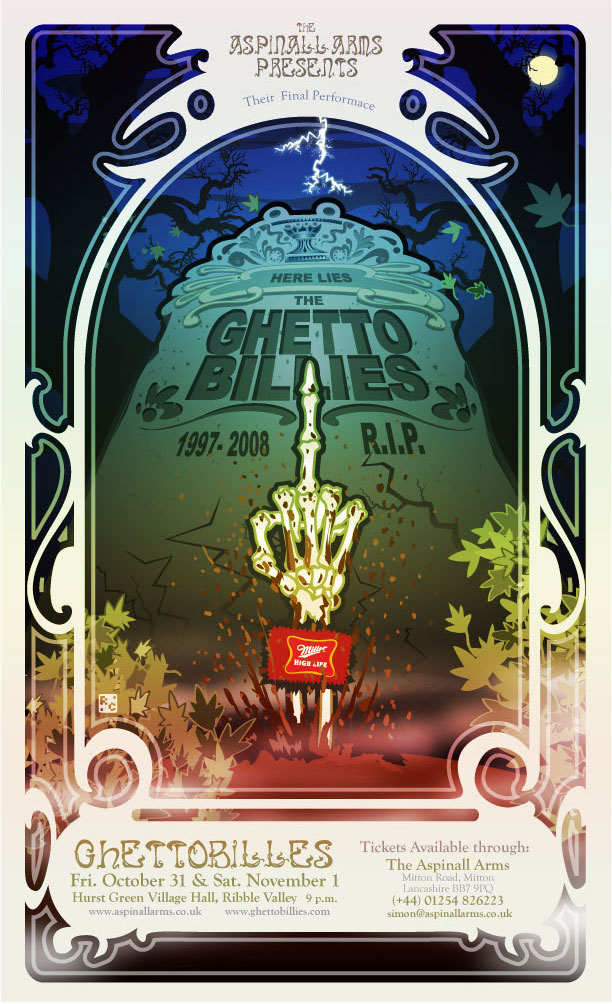 (click to see the rough sketch of the poster).

It’s funny how for the last few years of the band it seemed like such a burden- and it was. All the guys agreed that it was becoming increasingly difficult for us to maintain this lifestyle. It was becoming unbearable. The lack of money, the incredible amounts of alcohol that HAD to be consumed. The sore and stiff bodies that were starting to actually feel like real physical disabilities. All of it added up to the question, “what are we getting out of this?” the answer was; not much anymore.

Anyways all this is really something I should be talking about in another blog post called “My pretend life for 11 years”, but during that time I also did something else besides getting drunk, sleeping on strangers floors, and screaming and playing until both areas bled, and that was my charge to create the best enticing visual I could think of to get people to come to our shows.

The art of making a concert poster is pretty much lost now. It does happen here and there with a few bands out there that really care about it, but for the most part a lot of bands just take a photo of themselves, add some information and put their god awful logo as big as they can smack in the middle.

I’ve always prided myself on being head of the visual aesthetics of our band. Whether it was a good thing or a bad one, almost everything that was seen in conjunction with our band was a conscious effort on my part to draw the viewer in and hopefully make them curious about us, or at the very least to hopefully remember us the next time they heard our  bands name.

In the old days I used to spend a good 15 or so hours on each and every postcard that was sent out to our fans for the upcoming shows. Back in those days we didn’t have as many shows or fans as we did later on and I could do 1 postcard per month and send it out to our friends/fans to remind them of upcoming performances. I always liked to hear them say “I’ve got it on my fridge! I never forget a show!”, and I’d think to myself “yep, it worked”.

As the years rolled on there was just too much else that needed to be considered and done for the band and in my non rock and roll life that I didn’t put in as much time into each poster. With the computer I discovered a new aesthetic and concept of what the concert poster could communicate and began using imagery and strict shock value to get peoples attention. I learned a lot about which posters stuck out on the bars wall next to all the others and which ones just practically disappeared. I learned that often, a good poster wasn’t just good when viewed by itself, but also in the context of it’s surroundings.

“…a good poster wasn’t just good when viewed by itself, but also in the context of it’s surroundings.”

After all this time, I’ve learned a lot of artistic skills through this process and practice. I’ve probably created over 300 posters for the band throughout the 12 years that we have existed and I still have my favorites.

This Halloween we will play our very last show and I thought it fitting that I should also create a concert poster deserving of that momentous occasion. I wanted it to be somewhat of a classic concert poster. A throw back to the days when Art and Music were inseparable and the folks that specialized in those areas all hung out together getting drunk and giving the middle finger to the establishment.

I will hopefully make more concert posters for others and even another band I might be in someday, but I will most likely never make another Ghettobillies poster and right now, as I finish this one, it makes me a little sad.

UPDATE: Do to the venue owners concerns that the middle finger poster might not be welcome to post in all places, he’s asked me to make an alternate poster, to which I made this one. So I guess THIS will be my last Ghettobillies poster ever….maybe. 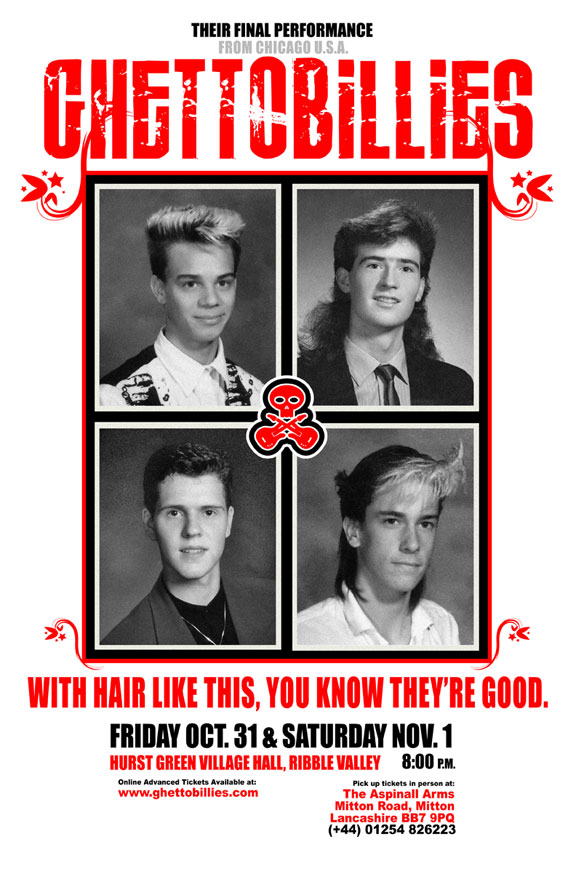 I’m glad SOMEONE thought this second poster deserved a comment. It was hard not to break out in uncontrollable fits of laughter while making this. Later on , I realized that a better quote at the bottom of the poster would have been “Hair Today, Gone Tomorrow”. This also would have had a multiple meaning.

Boys, im still livin that life, gods givin hard cider and old school farmin ways,. People trash the place like its the Hudson river Yet i still see the beauty , never had a tuned bone in my body but still remember the Gitfiddler In Milford, Love Matt, Still have this crazy random hard on for l. Lenhard