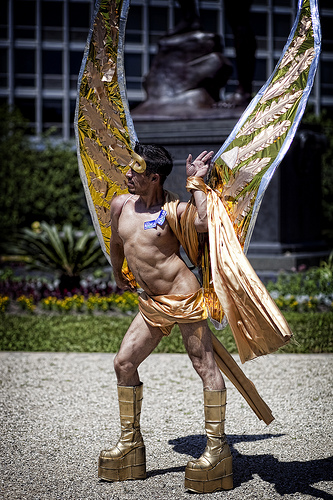 Chicago’s Gay Pride Parade is huge. Whether you are gay or not, it is something to see.

This year’s gay pride parade did not disappoint. As usual the streets were filled with freaks and beauties, devils and angels; and the millions of people that came to see them and celebrate with them. There were protesters, half naked men, brazilian dancing girls, bubbles, disco balls, choppers, and anything else you can imagine that doesn’t really belong on the streets of Chicago in the middle of the afternoon.

Assless leather chaps just don’t seem quite as threatening or sexy in the sweaty afternoon sun.

However, all of it added up to an incredible spectacle that only the dykes on bikes and dancing queens can deliver.

If nothing else; You gotta be yourself.

robb, these pictures of some of the finest. truly amazing. like i would love this as a coffee table book.

Thanks, Erin.
This means a lot to me, coming from you.