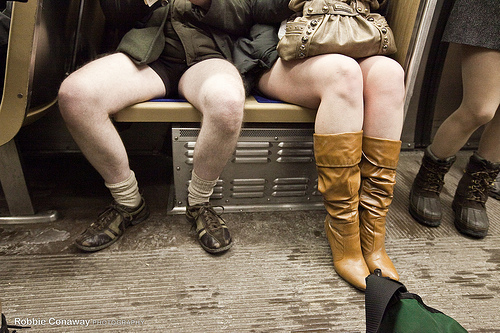 January 10th is the annual No Pants Subway Ride, which is participated in all over the world in major cities (i.e. Chicago, New York, London, etc). This year the Chicago No Pants Subway Ride started at our stop here in Edgewater at the Granville stop on the Red line.

I was there with my trusty camera snapping pictures and getting video faster than you could say “commando”. Which is what I was…so my pants stayed on. Unless I felt like getting arrested or beaten up…or both.

To make things even more daring and difficult it was 10˚ degrees farenheit with a windchill of -5˚F!

Those people got balls, I’ll give ’em that.

UPDATE: The photo above was also chosen, along with 16 other pics from other photographers for The Chicago Reader’s best photographs of 2010!

I don’t know how you didn’t crack up around the dude on the phone. “Everybody on the train is naked! They got they boxers on!”

When need be, I can keep be straight.