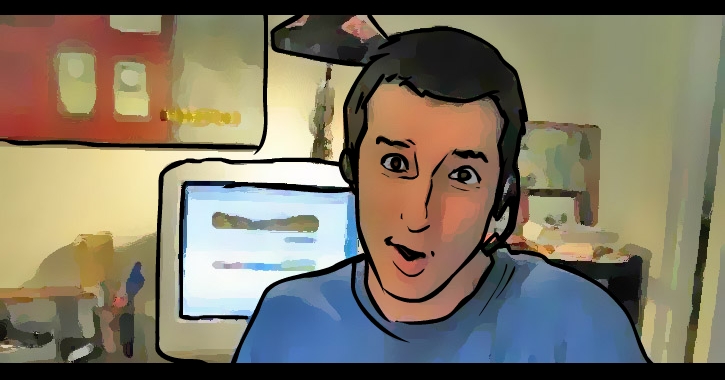 After 580 jpg’s, 5 steps in photoshop filters that had to batch automate over 600 images, 53 hours to hand draw 580 portraits and backgrounds, and 1 soundtrack with music, to accompany approximately 12 frames a second at 60 seconds long, I’ve finally finished my first official commercial animation.

This has proven to be one of the most difficult projects I’ve done so far. It’s also been one of the most rewarding.
This was a lot of hours, carpal tunnel and tendinitis inducing work, but I really believe it was all worth it.
Here it is, in it’s entirety. Don’t press play until it’s fully loaded. Grab some popcorn and turn up your speakers, yo!
Rotoscope Animation Link

(side note: for those of you who know him – yes, that is Derek Kramer. The voice over was done by an actor somewhere else in the universe.)

COOL! there is no way people would believe that is Kramer! He doesn’t care about other people’s intrests!!

Very nice Frido – has Kramer undergone hormone therapy or something? His voice doesn’t quite sound like I remember it…

The voice over was given to me. I had Kramer lip synch to it. It’s been mentioned that it sounds almost TOO deep, as if it’s been augmented in some way, however, I’m not aware of any changes made to the voice over recording. I think the actor just sounds like Lurch from the Adams Family.

√ Czech with an American. » Blog Archive » Master of the Universe.

[…] I think is noteworthy. This particular image was for Alpine Access the same company that I did the rotoscoping animation for. The goal of this piece was to depict the complicated nature of the multitasking computer […]